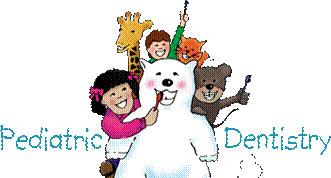 Pedodontics, or pediatric dentistry deals specifically with the oral care of children. A Pedodontist, or pediatric dentist, receives training in child psychology, growth and development. They are an ideal choice for children with fears or behavioral problems that make visits to the regular dentist unproductive


Babies are born with their primary teeth formed underneath the gums, but they don’t start appearing until many months later, usually between six to seven months after birth; however, there is considerable variation in the timing. 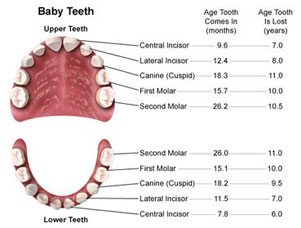 Children’s teeth begin forming before they are even born. The first primary, or baby teeth, to erupt through the gums are the lower central incisors. These are followed closely by the upper central incisors which come through around four months after birth. Although all twenty primary teeth have usually appeared by the time the child reaches three years old, the pace and order of eruption varies from child to child.


Oral care should begin soon after birth. Gums should be cleaned after each feeding. You should begin brushing your child’s teeth as soon as they appear. Permanent teeth start to come through around the age of six. This begins with the first molars and lower central incisors. This process continues until approximately age twenty-one. Adults have twenty-eight permanent teeth, or up to thirty-two including the third molars (wisdom teeth).


There a couple of simple rules that usually applies to the eruption of baby teeth: 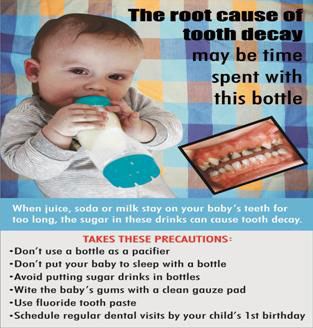 Your child’s first baby tooth is another milestone in the growth of a child. Parents love to celebrate the tiny, yet momentous steps that pave a child’s healthy development. Keeping your child free of tooth decay is the goal. A little effort may reveal the secrets how dentists keep their own children cavity free. Pedodontics focuses heavily on preventative oral care to reduce the risk of future complications like thumb sucking in the children, thus possibly reducing the risk of overbite. A Pedodontist may also start interceptive orthodontic treatment to prepare a child’s mouth for future orthodontic work. By the child is nearly 18 months old, start keeping him from bottles by this age. Doing so will help prevent Baby Bottle Tooth Decay. By the time children are three years old, they usually have a full set of 20 primary teeth. Faulty brushing habits coupled with the consumption of sticky substances are generally responsible for triggering dental decay or dental caries in milk teeth.


Usually start to erupt about first grade. A special note here is that often the first molar, or six-year molar, erupts before the front tooth. Additionally, the first molar erupts behind the last baby tooth and does not replace a baby tooth as occurs for front teeth. Often lower front teeth come in behind, on the tongue side, and give the appearance for a while as if there are two rows of teeth.


If baby teeth are lost too early, the other teeth can drift out of their position and invade the empty space. This might cause permanent teeth to come in crooked or unable to erupt into the gum, which leads to malocclusion.

Preventive dentistry is perhaps the singularly most important role the pediatric dentist can play in your child’s life. Beginning dental visits early is the key to success, as it helps and assists us in recognizing and warding off potential problems before they become serious. Child should be thoroughly examined to detect any potential problem areas, diet counseling, and if necessary, fluoride recommendations by the dentist. Dental care – common conditions – 0 to 5 years


Mouth ulcers affect 20 per cent of the population. The natural healing takes one or two weeks. In the event these are painful and accompanied by fever, consult the dentist/doctor. Meanwhile, citrus in all forms should be avoided; take less salty foods; and apply topical anesthetic. Your Kids suffering with dental problems? and you are in search of the best Pediatric Dental Care ? Then your are at the right place.We are here to avail our services.